In the singing world, there are (at least) two different ways to produce sounds. They're called chest voice and head voice, possibly after the way they feel when you're using them: with chest voice, you feel vibrations mostly in your chest, and with head voice, you feel them mostly in your head (possibly sinus cavities? They're hollow and in approximately the right area).

Chest voice is the mechanism used when you're speaking, and is generally said to have more "colour" than head voice. Okay, sure, but what's colour?

Here's a recording of me singing the F above middle C with head voice and then chest voice, and a screenshot of the file when run through the spectrum analyzer program baudline.

Spectrogram (warning, this is kinda huge)

Rarely in real life do you encounter a pure tone; rather, you hear a pure fundamental frequency accompanied by (also pure) overtones. The strength and pitch of these overtones determine the timbre (character) of the sound you're hearing. When it comes to human speech, the relative strengths of these overtones to one another determines the vowel sound that you hear (perhaps I'll explain this in a future post). A formant is, roughly speaking, a frequency range in which the overtones are especially loud. They're caused by resonance of your voice in your mouth, nasal cavities, chest, etc.

I annotated the harmonic numbers in red and spraypainted in yellow anything that looked like it might have been a formant. Frequency (pitch) is plotted horizontally, with brighter pixels representing a stronger pitch presence. Each horizontal strip is a slice of time, and the higher a strip is, the earlier that time slice was.

You can see how all harmonics up to about 23 were present when I was using chest voice, though some were stronger than others. I'm not sure if they were actually not there or if my microphone was too shitty/the noise floor was too high/I was singing louder for the second tone.

Oh well, at least there were some things that my microphone did pick up for sure. The formant around harmonics 20-22 seems to be completely absent in my head voice, and the formant centred around the $10$th harmonic seems to have split up; the $9$th harmonic is visibly quieter than the $8$th or $10$th.

As an aside, I find it interesting that the second and third harmonics are louder than the fundamental frequency. I'm not sure if this is a peculiarity of my voice or of voices in general.

Other weird stuff my microphone picked up

There's also some other stuff in the recording. In the space between the two tones, there are a few extra lines that aren't accounted for.

My laptop uses an SSD, so the hard drive wasn't producing noise. My laptop does, however, have a fan. I ran the command sensors to get fan speed. I figured that the fan speed didn't change much after I finished recording. I got 3530RPM, which translates to just under 60Hz (divide by 60 to go from RPM to Hz because there are 60 seconds in a minute).

If you squint, you can see that the barely visible first harmonic is around 59.22Hz, which seems about right. Okay, that explains the lines at 178Hz, 296Hz, 355, 414 and so forth all the way up to 1706Hz. It's hard to tell if the lowest even harmonics are actually not there or just lost in the noise, though.

On reflection, my fan does sound kind of like a saw, so this is not terribly surprising.

I don't know what's going on around 8750Hz, but I wouldn't be surprised if it was related to the fan. a lot of those frequencies are pretty close to multiples of 59.22. 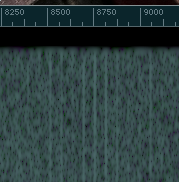 Also, what's this all the way over at 19918Hz? It's far too high to be NTSC flyback whine, and too high to be an FM radio pilot tone (not that those should ever be audible anyway...)

Mysteries for another day, I guess.

Update, almost 3 years later: it was probably a transformer in a laptop/phone/etc charger!